In this case study, a district is supplied by a 5th generation district heating and cooling network, also called anergy network. The entire planning process can be carried out with the nPro tool: From the demand calculation, to the pipe dimensioning, to the sizing of the components in the energy center.

An energy supply for an exemplary district with 6 buildings is planned. The location of the district is assumed to be Berlin (Germany).

In a first planning step, the demands for heating, cooling and electricity are determined for each building. It is assumed that all buildings are supplied with space heat and domestic hot water by heat pumps in the buildings which are connected to the 5GDHC network. For the calculation of the heat pumps, COP data is available in nPro for different heat pump manufacturers. Space cooling and process cooling (e.g. server cooling) are covered directly by a heat exchanger connected to the cold pipe of the network. Plug-load demands (e.g. for lighting) and electric demands for e-mobility are the electricity demands of the district. An additional electricity demand results from the heat pumps. The demand profiles for each of the 6 buildings can be created in nPro with a few clicks. Annual profiles with hourly resolution are of great importance for the calculation of the district, since renewable sources (here photovoltaics) strongly depend on the daytime and season.

After adding all buildings to the district, the load profiles can be displayed in nPro in hourly resolution. Table 2 shows the heat and cold imported from the 5GDHC network as well as the electricity imported from the power grid, which is used to cover the building demands and the electricity demand of the heat pumps. The amount of heat imported from the 5GDHC network is smaller than the heat demands of the buildings due to the fact that the heat demand at the evaporator of the heat pump is smaller than the heat output at the condenser of the heat pump. In addition, nPro takes into account demand balancing effects in the buildings: If heating and cooling demands occur at the same time, a waste heat flow occurs at the cooling application (heat exchanger), which can be used directly at the evaporator of the heat pump. In this way, heating and cooling demands - if they occur simultaneously - can partially balance each other out. This balancing effect in the building, as well as in the 5GDHC network, is taken into account in the nPro simulation. Figures 2 and 3 show the demand profiles at the energy center for heating and cooling.

Figure 3: Heating and cooling loads at the energy center over the year

The balancing effects between heating and cooling demands in the building and in the 5GDHC network are shown in Figure 4. While the total heat demand of all buildings is 7333 MWh/year, the buildings only need to import 4579 MWh of heat from the 5GDHC network. Firstly, this is due to the fact that less heat is required at the evaporator of the heat pump than is available at the condenser (the difference is the electric power consumption of the heat pump). Secondly, in this example, 1025 MWh are balanced out directly in the buildings by using waste heat from the cooling supply directly at the evaporator of the heat pump. This also reduces the cooling demands from 5303 MWh (building demand) to 4278 MWh, which must be imported from the 5GDHC network. In the 5GDHC network, an additional 432 MWh can be balanced out due to simultaneous heating and cooling demands at some times of the year. The heat feed-in at the energy center thus amounts to 4147 MWh and the cold feed-in to 3846 MWh.

Figure 4: Energy demands in the system: From the energy center to the buildings, there are balancing effects between heating and cooling demands, which reduce the feed-in power at the energy center. Figure based on Wirtz et al.

In nPro, the diameters of the pipes for district heating networks can be dimensioned semi-automatically. In this design example, the assumptions listed in Table 3 are made for the 5GDHC network calculation.

Figure 5 shows an example of the dimensioning of the supply pipe to buildings B, C and D. In the preliminary design, the nPro tool suggests three pipe diameters for this network section. In this case, these are the diameters DN250, DN300 and DN350. nPro then calculates the maximum pressure drop for each of the suggested diameters, as well as other key figures such as the annual pumping work or maximum flow velocities. Based on this information, the user can select the optimal pipe diameter.

Figure 5: Pressure drop in the flow and return of the heat network line supplying buildings B, C and D for three different pipe diameters.

The optimized pipe diameters for the 5GDHC network for this district are shown in Figure 6.

Figure 6: Pipe dimensioning for 5GDHC network.
In the nPro tool, pipe diameters for heating, cooling, and 5GDHC (anergy) networks can be determined and optimized.

For this district, the energy center provides heating and cooling via a 5GDHC network. The available PV module area is 8000 m². In addition, a central heat storage is installed. The storage can be used to balance out heating and cooling demands in the district even if they do not occur at exactly the same time. In the optimization calculation, the optimal capacity of the heat storage system and the optimal PV module area are determined. The operation determined by the simulation is summarized in Figure 7. The PV modules generate 1207 MWh of electricity over the year. This is 10.3% of the electricity demand in the district. The CO2 emissions for this district are 3691 t per year. 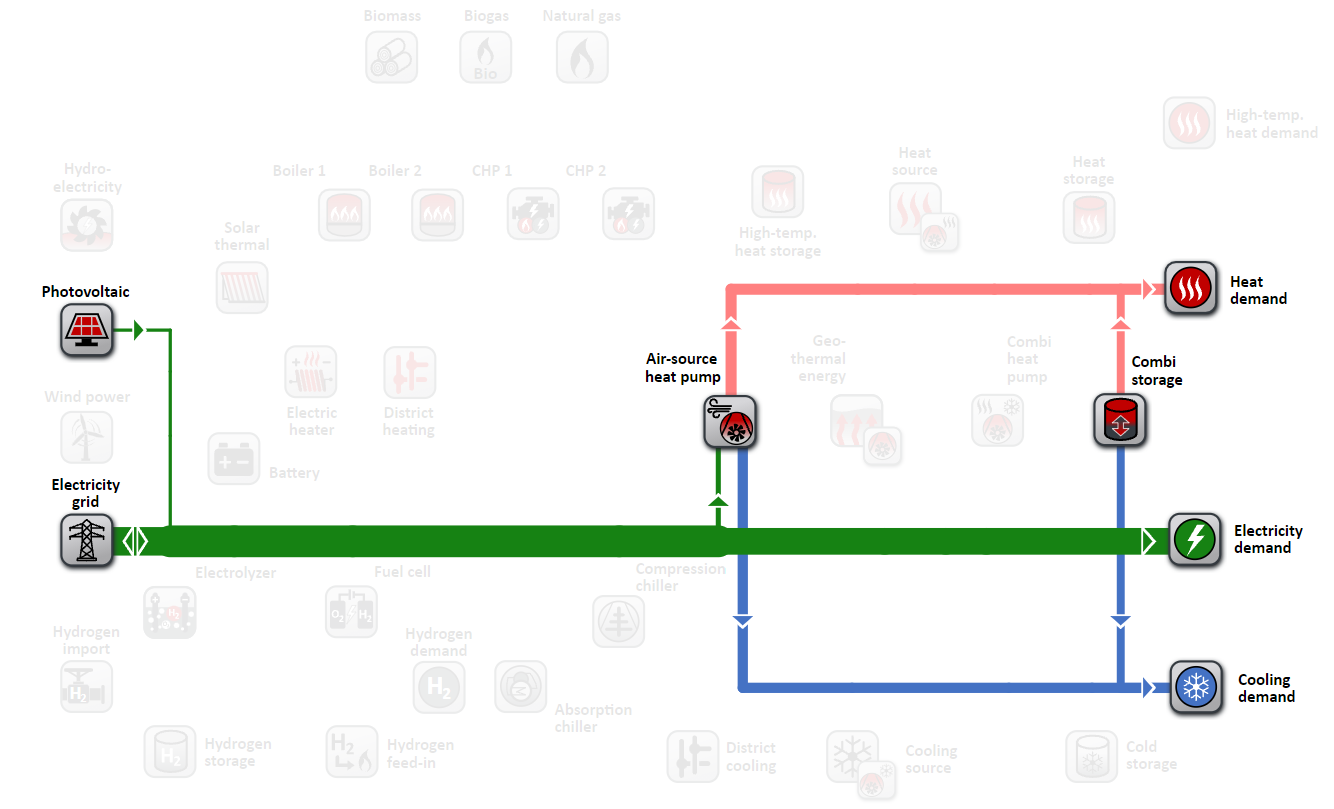 Figure 8 shows the operation of the central heat storage. In summer, but also in winter, excess waste heat from the cooling supply is stored and used in the evening and night hours to balance the residual heat demands in the 5GDHC network. In summer, excess waste heat is stored during the day in order to re-cool it during the night, when the air-source heat pump achieves better COPs due to the lower outdoor temperature.

Figure 8: Operation of the central heat storage over the year