The planning of hydrogen systems is complex, since the electricity sector as well as the heating sector may be considered in the planning process as well. Therefore, during the design process, suitable software tools can help to determine an energy system that meets high requirements for economic and system efficiency.

Typical technologies of a hydrogen-based system are

In addition, renewable energies often play an important role. Feeding hydrogen into an existing gas grid or using hydrogen in nearby energy systems, such as in hydrogen buses, can also be taken into account in the planning process. The combination of renewable energy sources, such as photovoltaics or wind turbines, with hydrogen technologies is typical, as hydrogen allows to store fluctuating power generation for longer periods of time. For long periods and high amounts of energy, hydrogen storages are more economical than conventional electricity storages such as batteries.

Hydrogen systems are not always the best option. This is mainly due to the conversion efficiencies of electrolyzers and fuel cells. Only about 65 % of the electricity input is actually converted to hydrogen in electrolyzers. Since hydrogen is stored under high pressure and therefore a lot of energy has to be used to compress the hydrogen, the storage efficiency is only about 88 %. Later, the hydrogen must be converted back into electricity in a fuel cell. Here, further energy losses occur. Typically, only about 35 % of the hydrogen input can be converted back to electricity. The remaining energy is often released into the environment in the form of waste heat. In some cases, the waste heat from the electrolysis and fuel cell process can be further utilized for thermal applications. Before planning a hydrogen system, it should always be checked whether there is no alternative system solution, for example to use surplus electricity elsewhere, due to the high losses of the hydrogen conversion processes. The coupling of renewable energies with the heat sector (heat storage, heat pump or heat network) is often another promising solution. 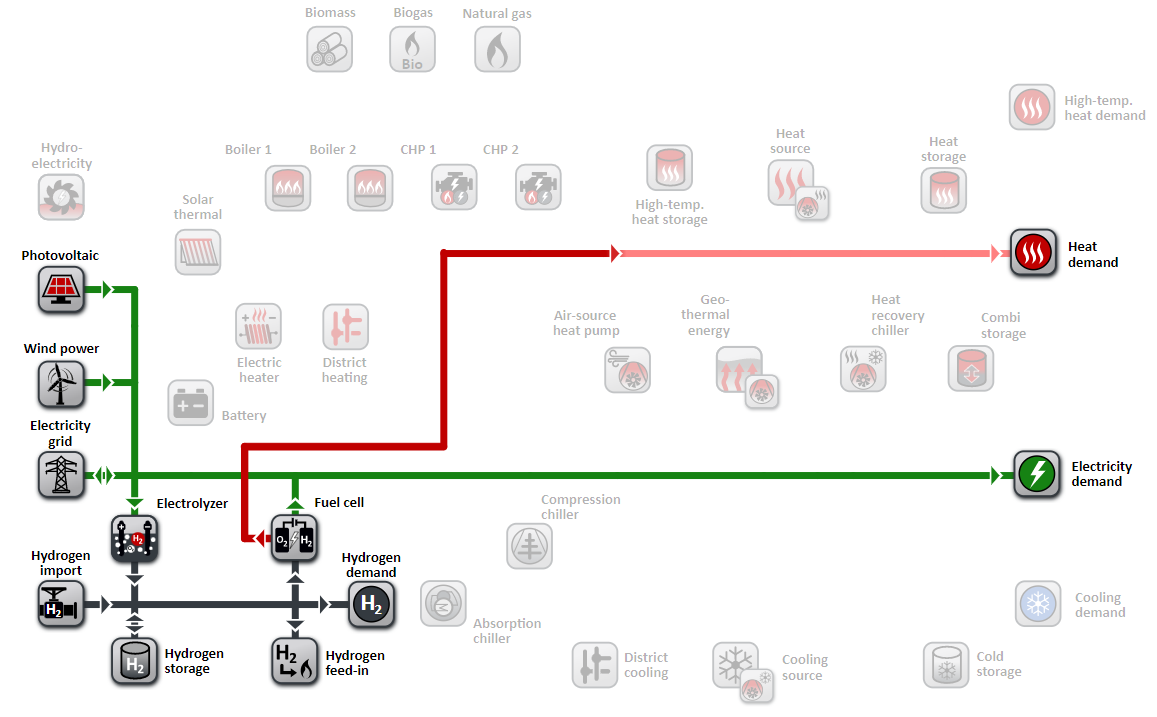 With the multitude of different system configurations, it is challenging to determine the best system configuration and the best system design. For this reason, a comparison of different energy concepts should always be carried out before detailed system planning begins. A frequently used approach for a technology screening are so-called mathematical optimization models. They make it possible to select from a large number of different system configurations the configuration that is optimal from an economic point of view. Ecological factors (CO2 emissions) can also be included in the system selection process. Mathematical optimization models are superior to simple Excel calculations because, on the one hand, they consider an entire design year with an hourly resolution and, on the other hand, they cover the entire spectrum of possible energy systems in a single calculation run.

In the nPro tool a techno-economic optimization is used to determine the optimal sizing of hydrogen storages.

The dimensioning and design of hydrogen storages poses particular challenges, especially if they are used as seasonal storages. The advantage of hydrogen storages is that energy can be temporarily stored with low losses even over longer periods of time. However, a large number of influencing variables must be taken into account for the correct design of hydrogen storages: What are the energy demand profiles for electricity, hydrogen and, if applicable, heat over the year? What is the supply of renewable energy sources and what typical generation profiles can be expected for the design year? Can the waste heat from the electrolysis and fuel cell process be recovered? All these questions influence the design of hydrogen storages. If the storage units are sized too small, they will not be able to cover long periods of low renewable electricity supply. If the storage units are sized too large and their storage capacity is rarely utilized, this reduces the economic viability of the energy system and leads to unnecessarily high investment costs. For preliminary planning, storage capacities can be determined with the help of a design calculation in the nPro tool. The nPro tool determines the optimal storage capacity under technical and economic aspects on the basis of a typical design year. To increase the robustness of the design calculation, not only a single design year can be considered, but several typical design years with different sets of weather and demand profiles can be investigated. In this way, a design of the power system that is robust to annual variations can be determined. For the dimensioning calculation, the nPro tool uses a techno-economic optimization approach, which is based on a mathematical optimization model.